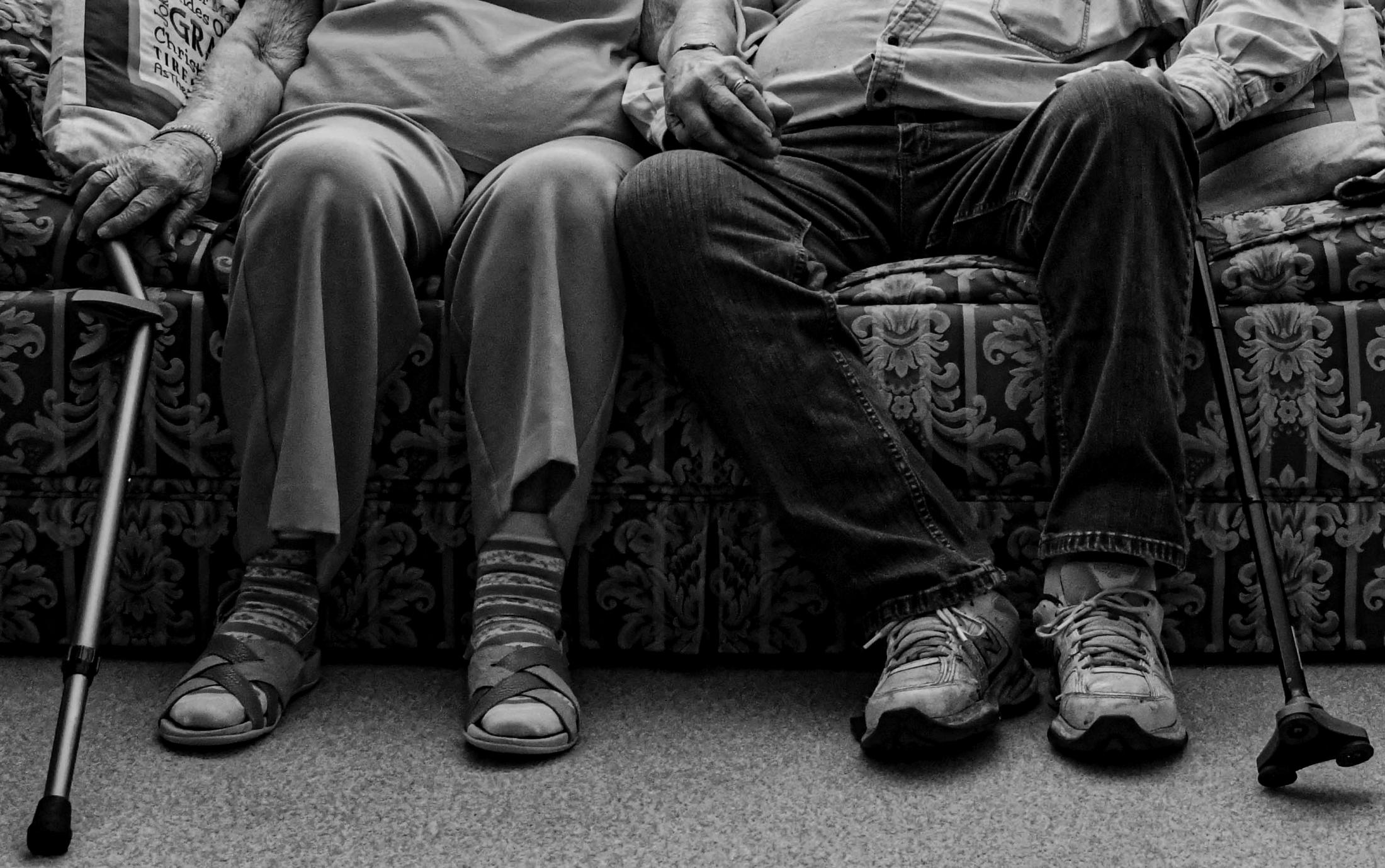 "It might not look like it, but we are having a lot of fun," Charlie Koelling said while holding Bettie's hand. Bettie and Charlie got married at the ages of 18 and 19. Charlie said that the secret to happy married life is “Yes, dear!”

"I don't cook, I don't clean. I am not like my mother." This was Bettie's reply to Charlie's marriage proposal. Although Charlie admired Bettie from a very young age, it wasn't until 1946 that they started dating. In a few months, the dating transitioned to marriage.
However, before they started dating, Bettie was engaged to marry Charlie's best friend. "They are not best friends anymore," Bettie said. "He was a good man but did not have an ambition. Charlie was very smart and charming." Bettie smiles.
It's been 75 years since Bettie said "Yes" to Charlie's proposal, but it seems like nothing has changed. Underneath their weathering bodies, their sprites remain young. 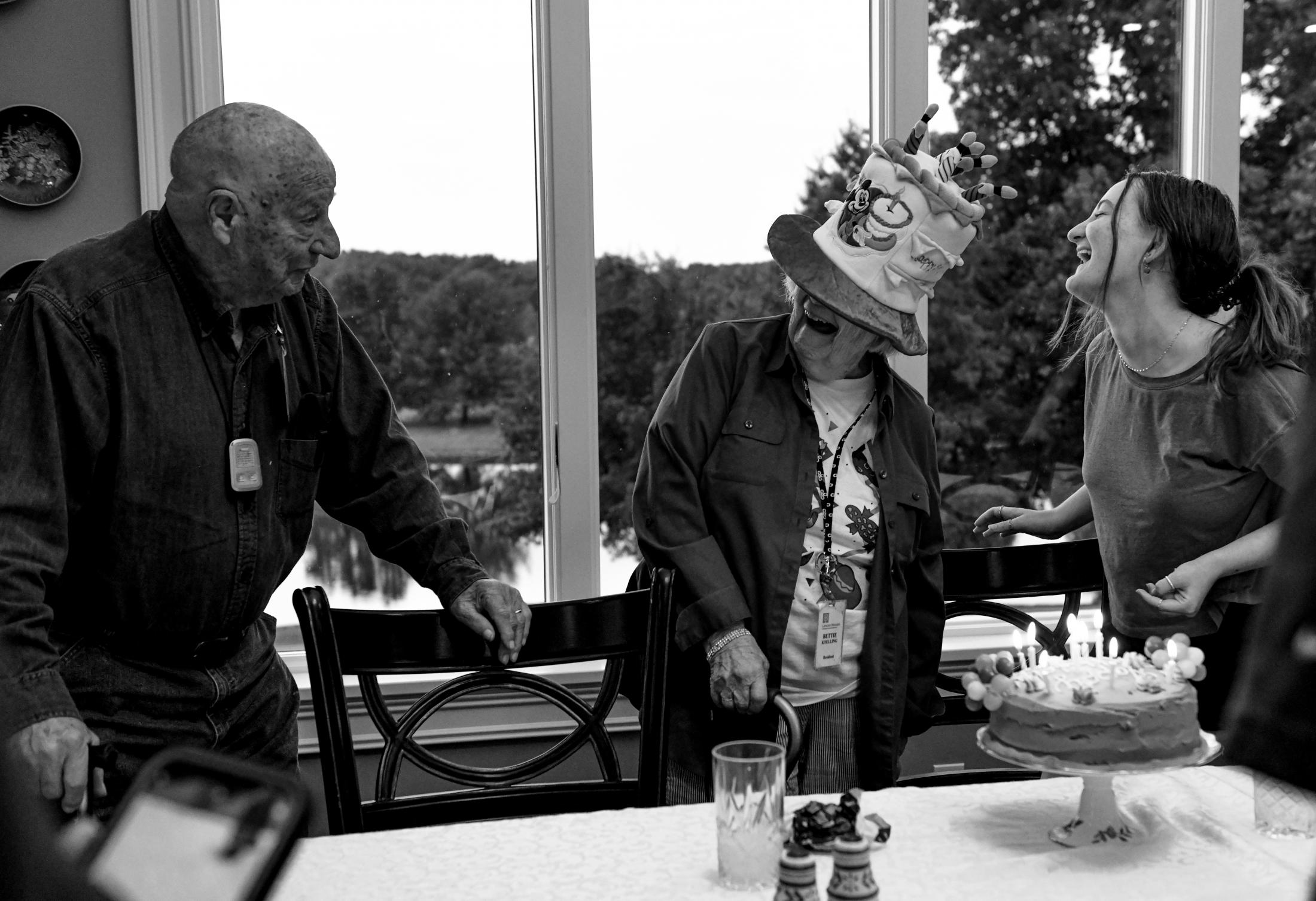 From left, Charlie Koelling, Bettie Koelling, and great-granddaughter Hannah Weaver break into laughter after Bettie puts on the birthday hat on Sept. 14, 2021, at Columbia, MO. "You are all caught up with me now," Charlie said during Bettie's 95th birthday celebration. 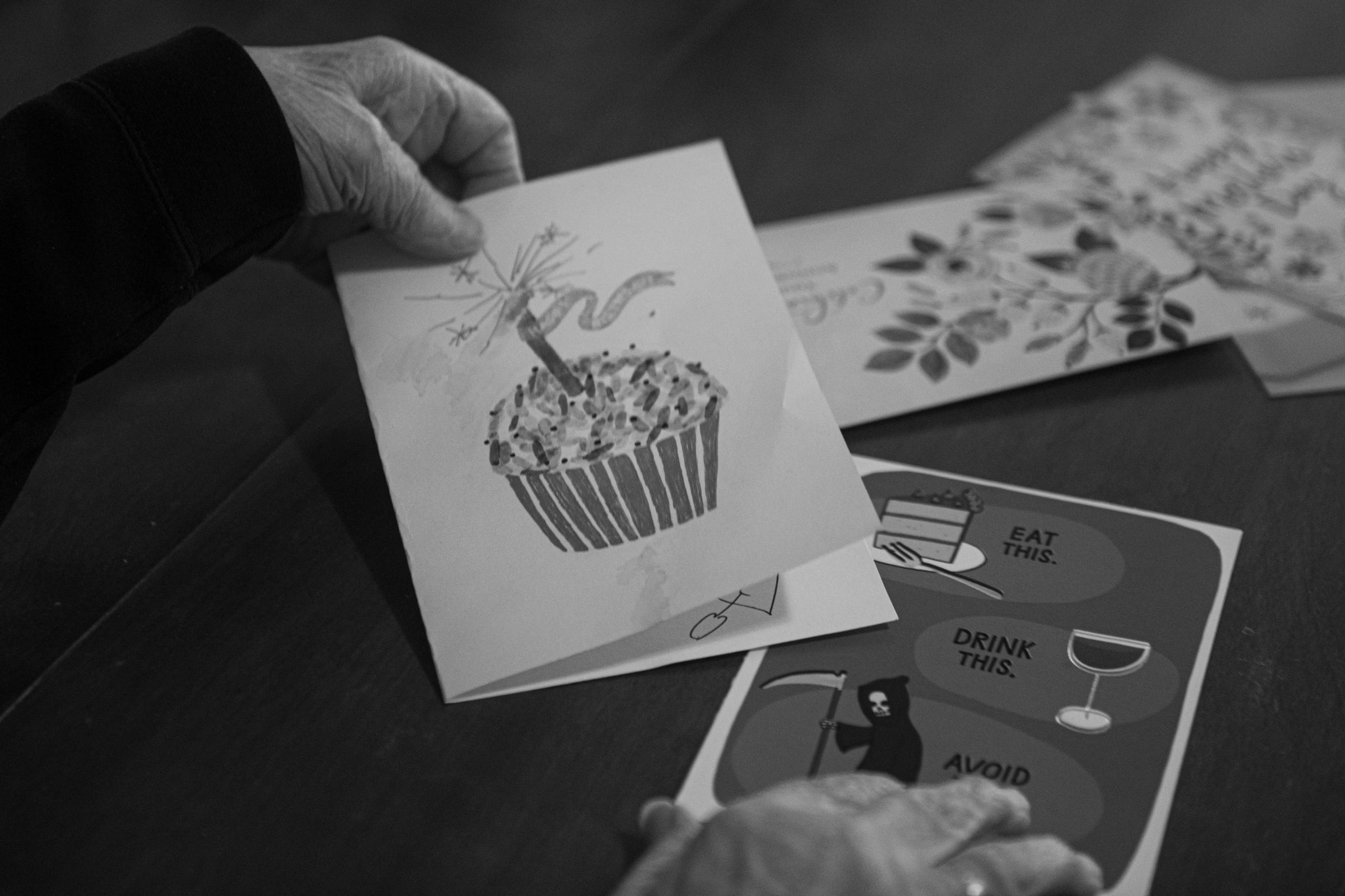 Bettie looks at the birthday card Hannah made for her 94th birthday. "It doesn't have to take a lot of money to be happy," Bettie said. "A lot of people don't think that's true." 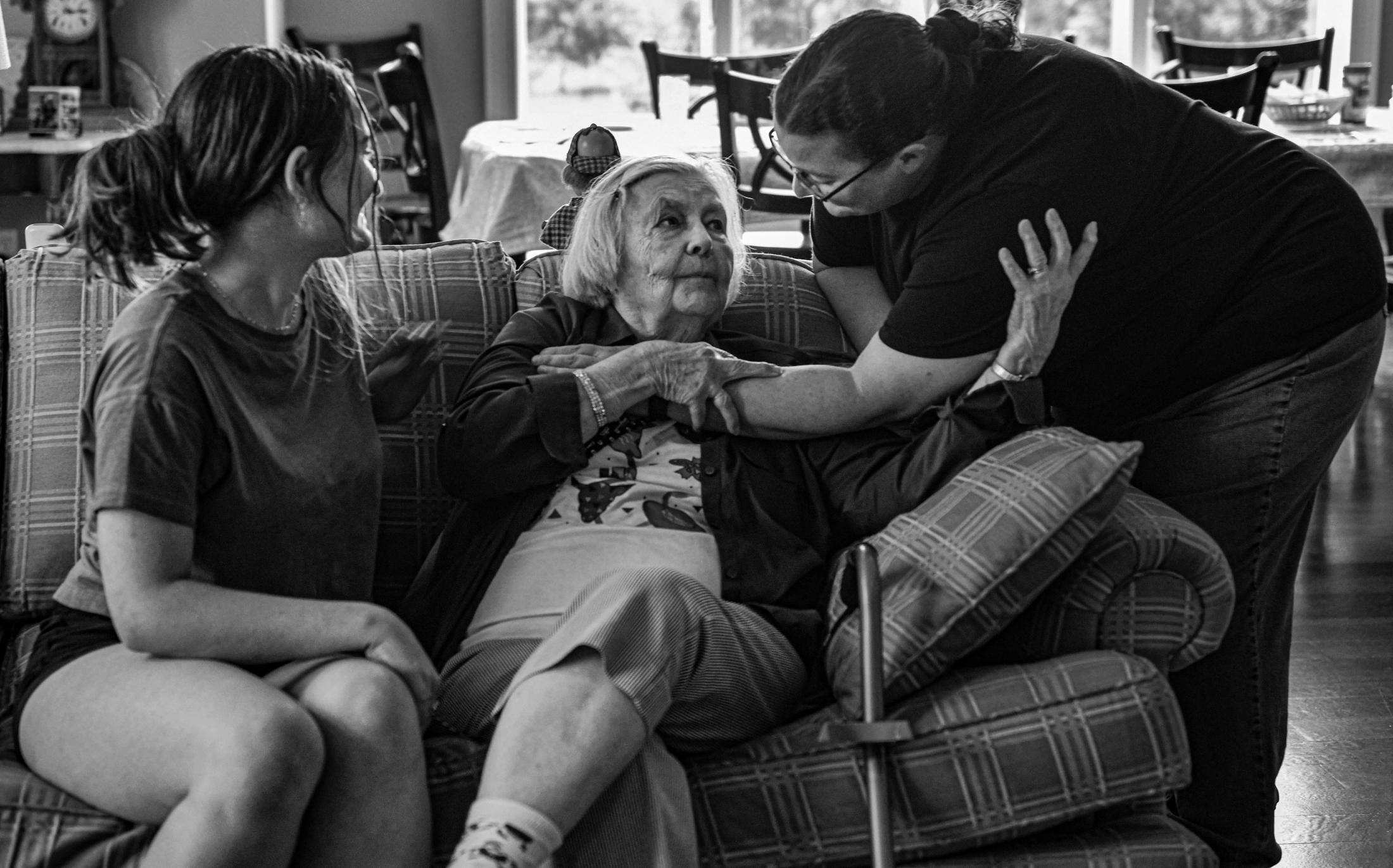 Hannah watches her mother, Carrie Weaver, embrace grandmother Bettie on her 94 birthday. "We love to hang out with them (great-grandparents)," Hannah said. She enjoys playing cards with her 'pappa' Charlie. 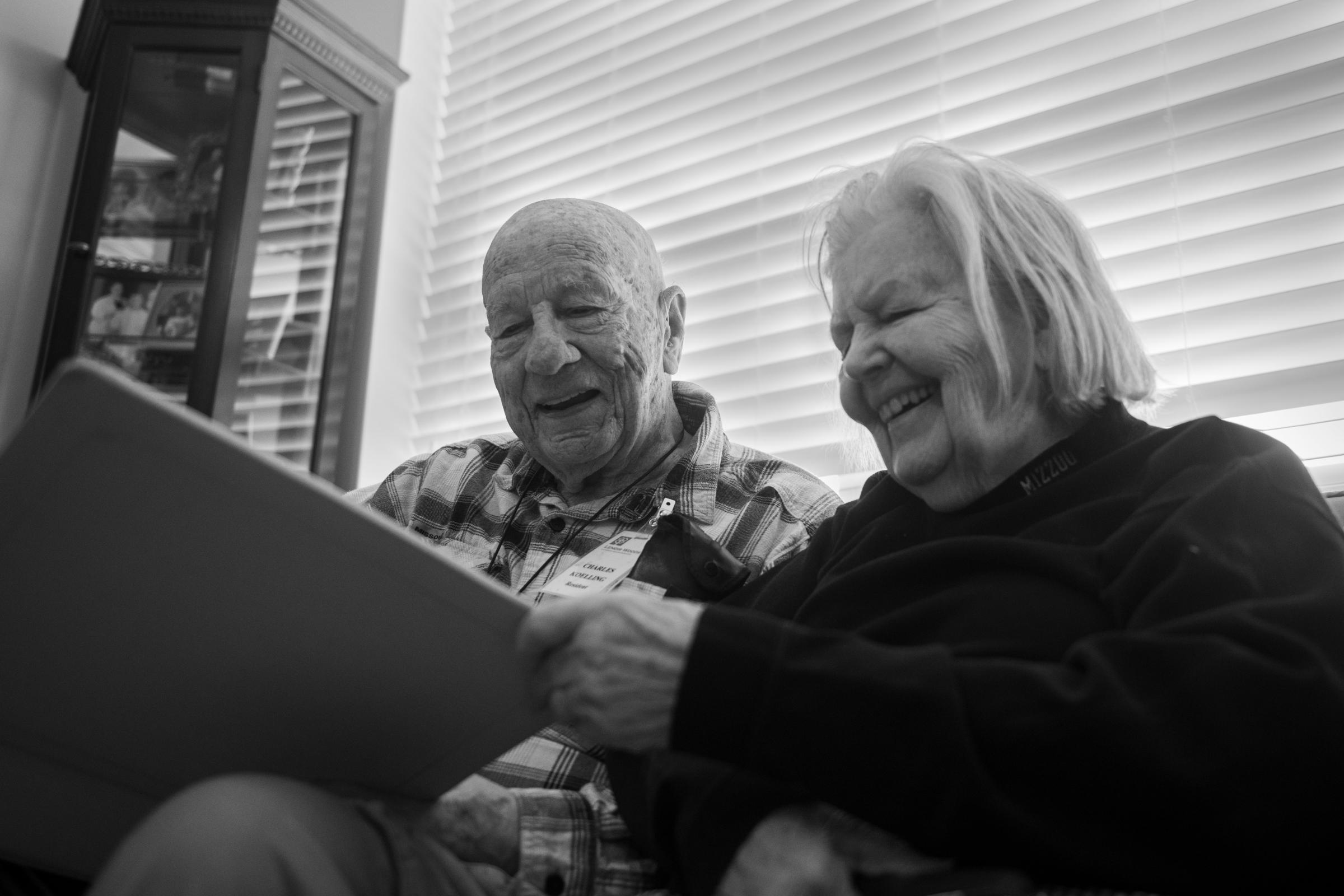 Bettie laughs as Charlie recalls their wedding day as they look at an old photo album. "There were only five people at our wedding," he said. Although their wedding ceremony was intimate, they later had a huge wedding reception. 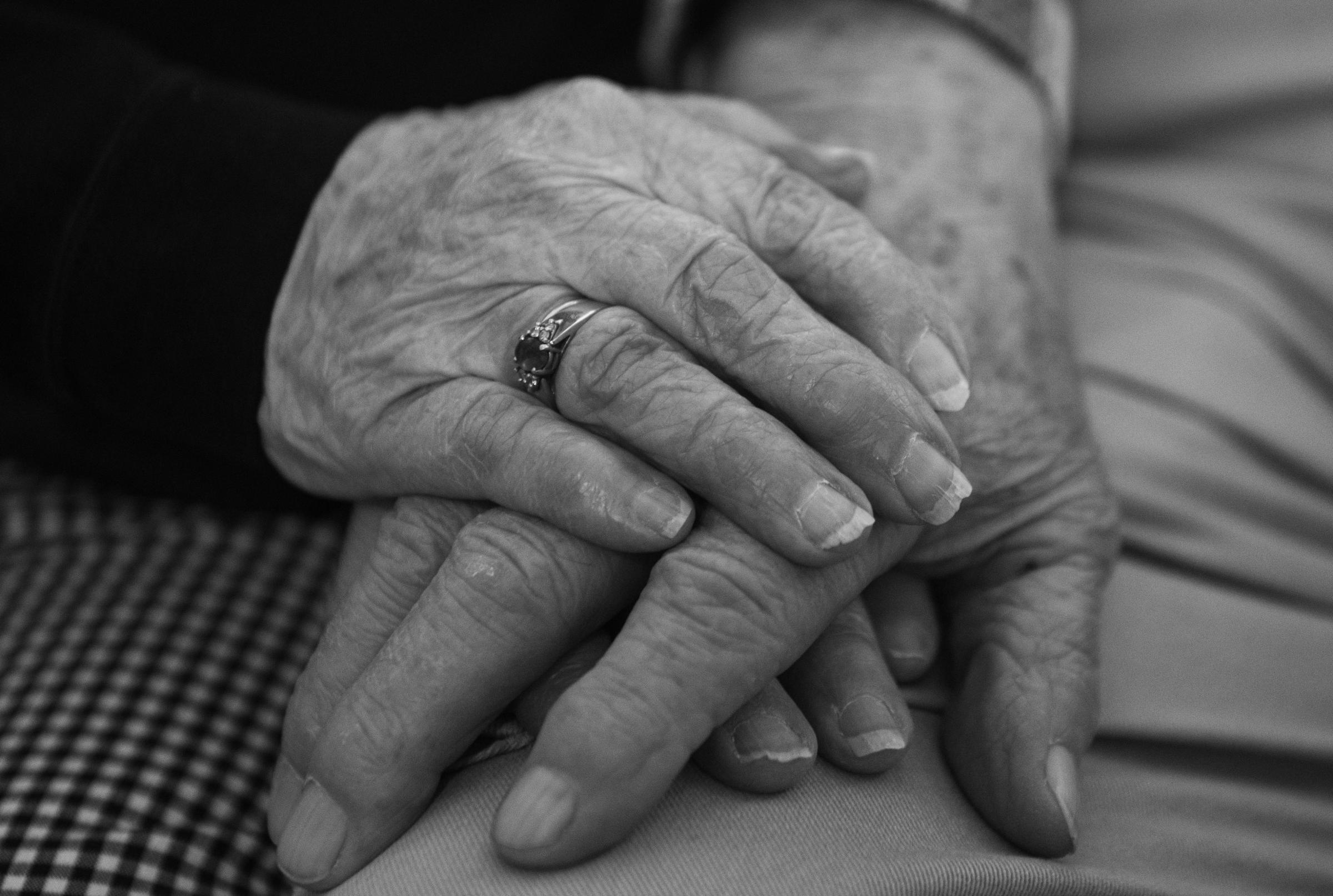 Bettie clasps Charlie's hand during a conversation at their apartment in Lenoir Wood Senior Living Community. "We've had a wonderful life together," She said. "We didn't have big expensive stuff, but we had a lot of fun." 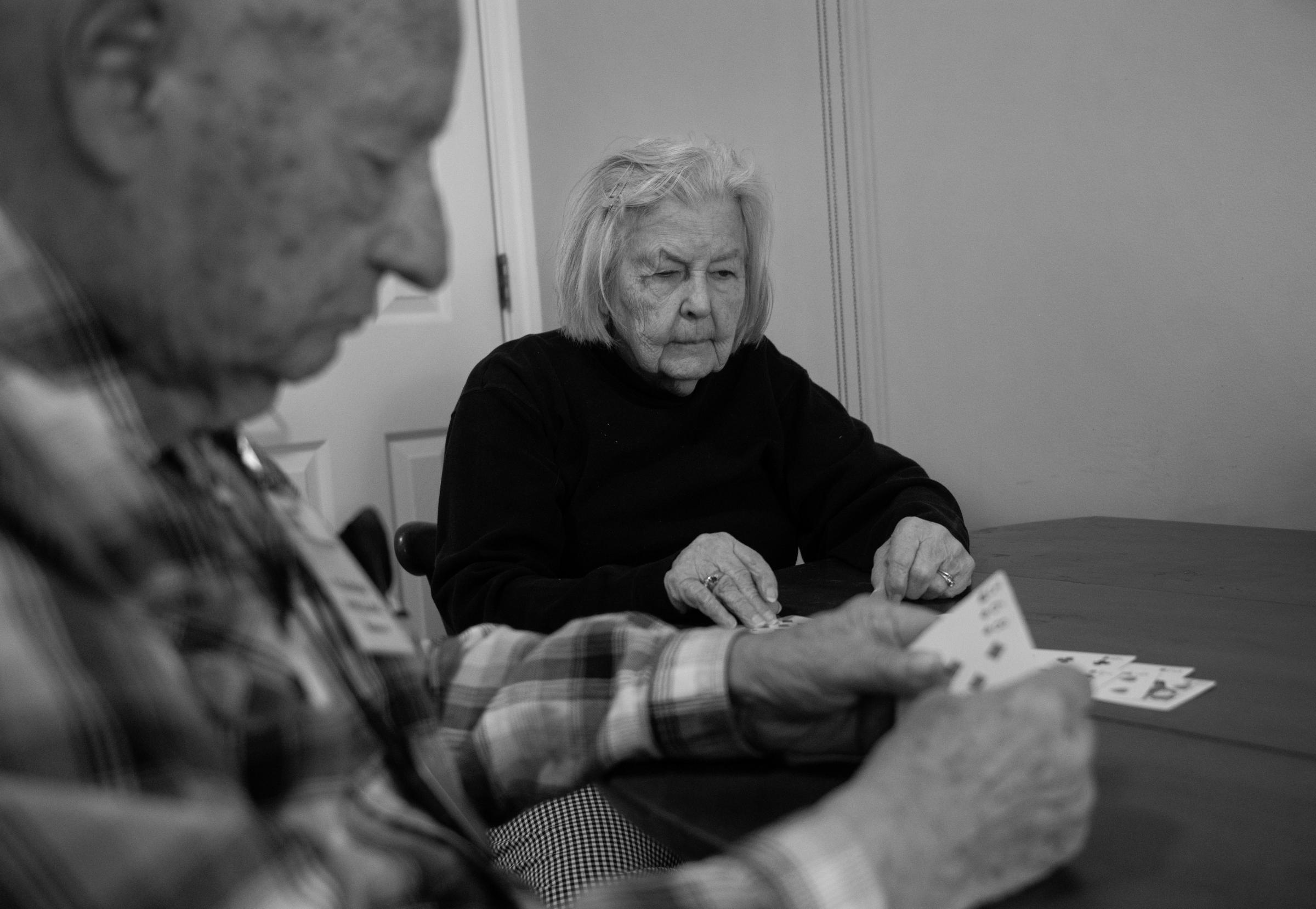 Charlie plans his next move in a game of two-person bridge, a game that they came up with. "We never argue," Bettie said. "We have disagreements, but we just agree to disagree."

Charlie performs his weekly ritual of refilling Bettie's medicine box. The couple expresses their love by fulfilling each other's needs and taking care of each other. Years ago, Bettie decided to work and financially support their family so that Charlie could pursue his Ph.D. "People were surprised and questioned my decision," Bettie said. "I would think there are people, and then there are PEOPLE." 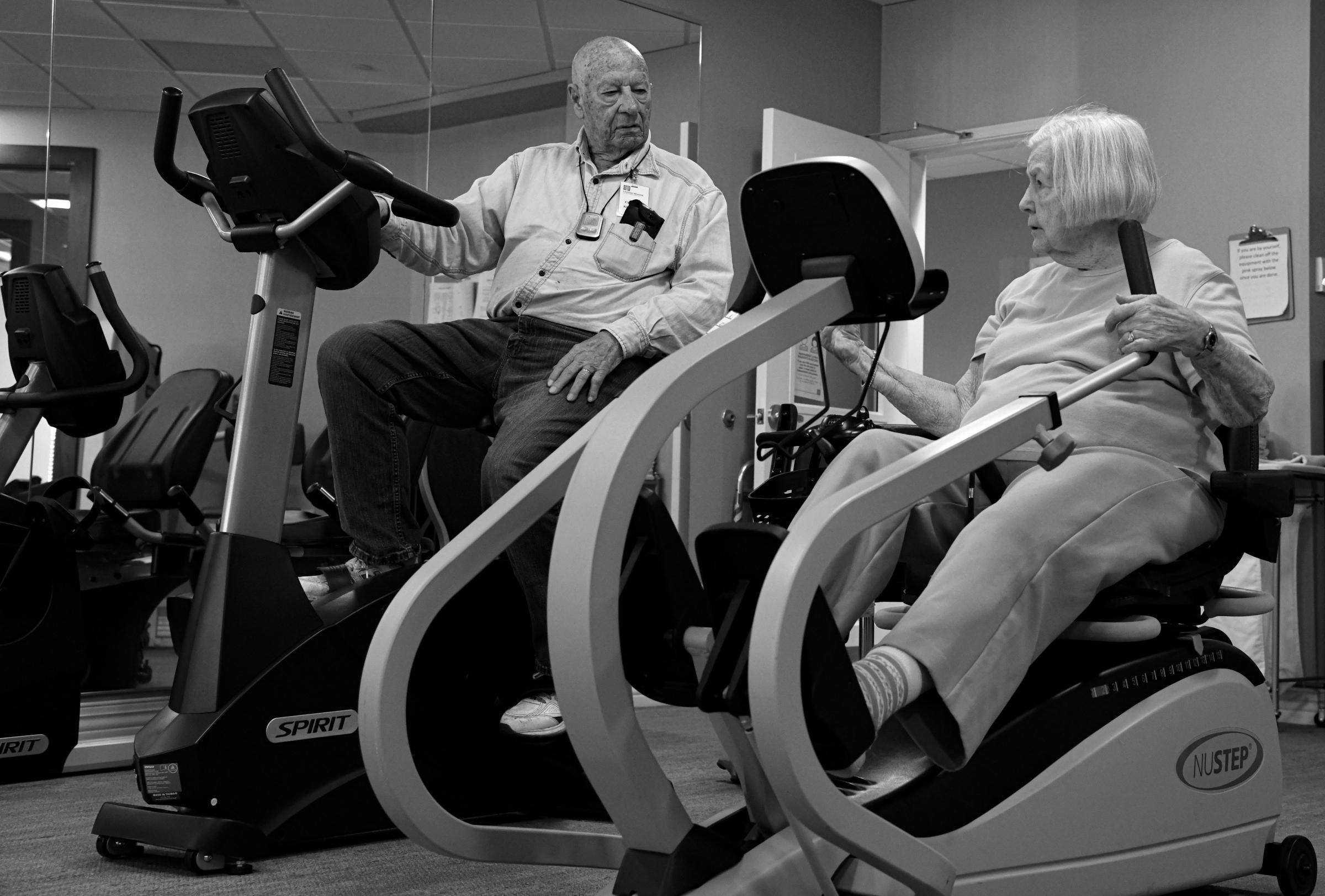 Bettie and Charlie exercise at the gym at their residence in Lenoir Wood. They usually do a lot of activities together. When they were younger, they had a family tradition of making chocolate fudge for Christmas. The tradition is now kept alive by their daughter Karen Weaver. 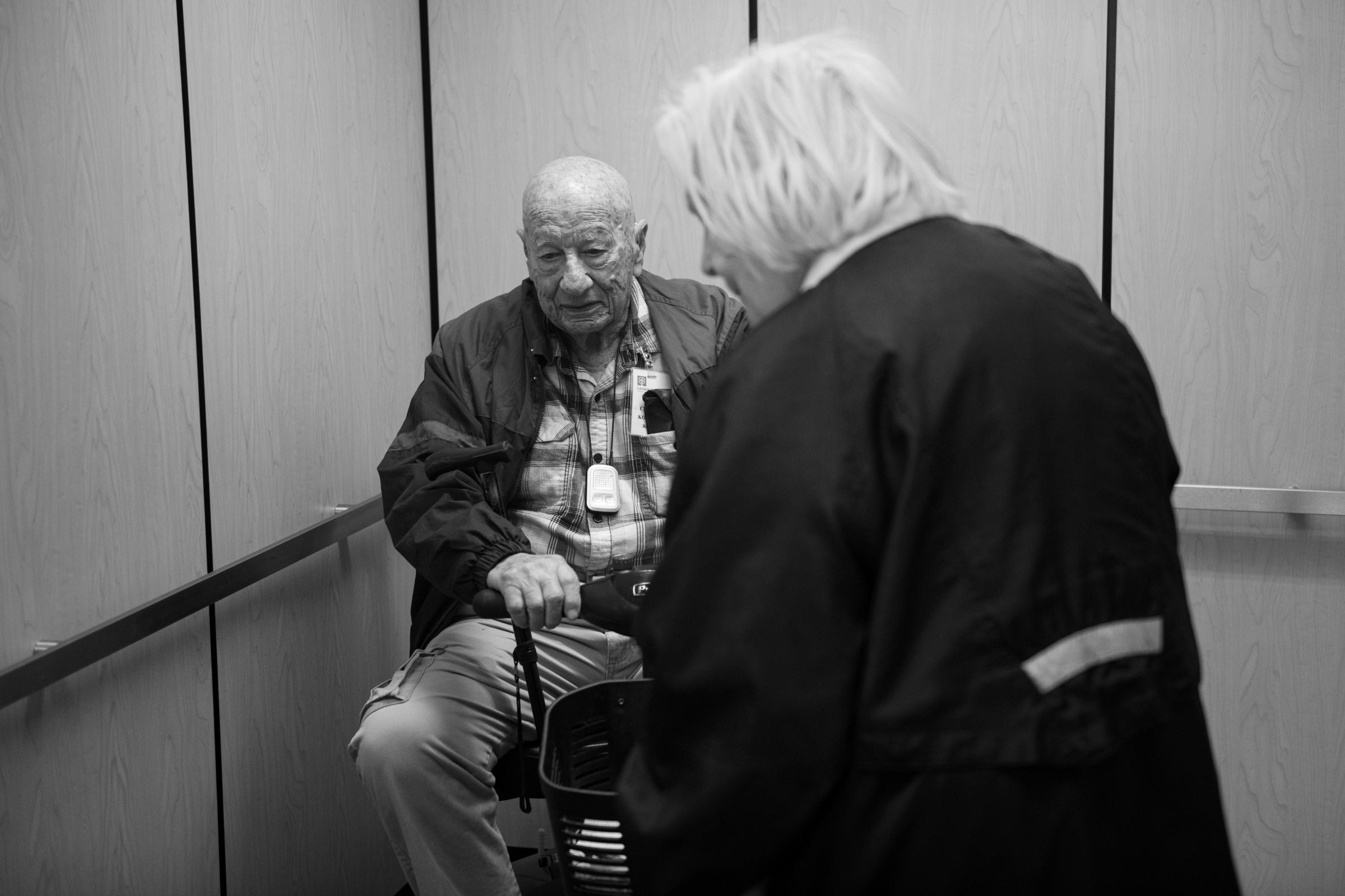 Bettie and Charlie enter the elevator to go outside and take a stroll. "I need to watch him like a hawk about what he is going to say," Bettie said. "Not everybody can take a joke." 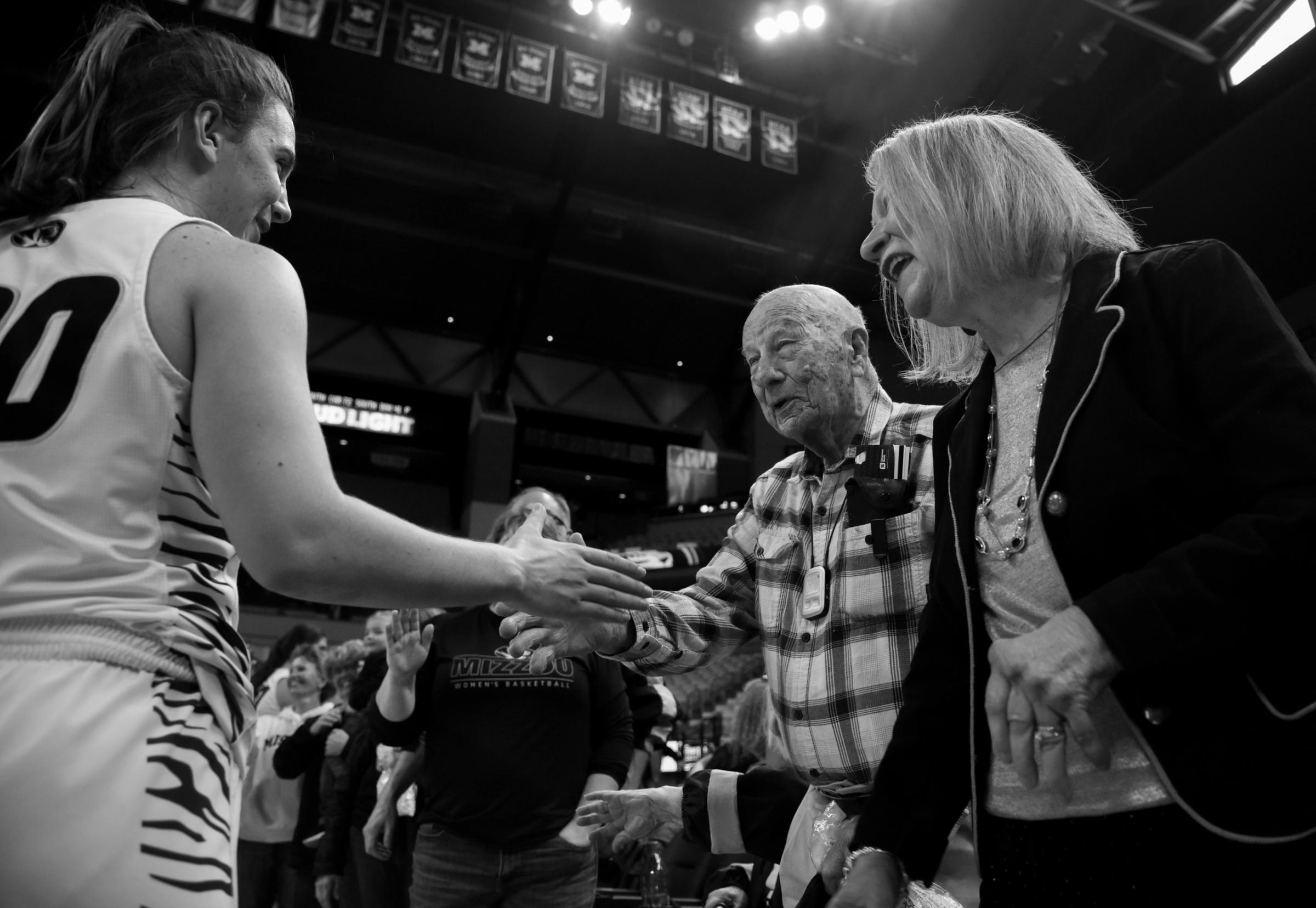 Charlie congratulates the Mizzou woman's basketball team after an exciting game against SIUE. Although the couple is 94 years old, they do not let their age limit their thrill for life. The couple engages in various social activities outside their retirement home and regularly drive to visit their kids.

75 Years of Togetherness "I don't cook, I don't clean. I am not like my mother." This was Bettie's reply to Charlie's marriage proposal. Although Charlie admired Bettie from a very young age, it wasn't until 1946 that they st...

Tanishka R. Photojournalist and Picture Editor based in Columbia, Mo.

I am a South Asian photojournalist and picture editor based in the American Midwest. I am interested in telling stories that show hope amidst adversity, focusing on the themes of race, social inequity, and the environment.